As of typing this latest blog post, Cue Castanets has been active for a year. I hope that those of you who check in here from time to time or, even better, subscribe to my posts via e-mail alerts have found some interesting writing on all things Spector and beyond.

I wish I’d been more active during the past two or three months but I’ve been busy with other things in my life which will make future posts on here more infrequent. But keep checking in – I have lots of ideas for interviews, reviews, song run-throughs and what not and I will eventually get around to those, I’m sure.

I had originally planned to post about something else tonight but then yesterday evening I learned about the sad passing of P. F. Sloan – one of my all-time musical heroes.

If I were to name my own, deeply personal holy Trinity of pop music, I would choose Brian Wilson, Phil Spector and PF Sloan,… or Philip Schlein as he was known before donning the P.F. Sloan moniker. Naming Sloan along with those two musical giants should give you all the proof you need that he is a musician I hold in extremely high regard. I’ve been deeply in love with his music ever since discovering it in the early 00s.

It’s always difficult to put into words the effect your favorite music has upon you. With Sloan, a great part of it has to do with his overwhelmingly emotive and expressive vocals. I’m continually amazed at the urgency that seems to simmer beneath each and every lead vocal of his. And the hooks! Sloan equals hook heaven! Oh man, the stuff he wrote alone or along with partner-in-crime Steve Barri is the stuff of legends as far as I’m concerned.

Merseybeat knockoffs? Check. Beach Boys-styled surf pop? You got it! Elvis soundalikes? No problem. Girl Group songs? Sure, how many d’ya need? Jangly folk-rock or Bob Dylan type social commentary? Why, I have a bunch of songs scribled down right here!

One type of music that Sloan actually didn’t take a stab at was fully fledged Wall of Sound productions. Which is no surprise really. Along with Steve Barri Sloan was on such a tight, grueling recording schedule that he probably never really had the possibility to spend time developing bombast productions. But I’ll bet he could have worked wonders within that type of genre too. There’s a demo floating around among Sloan collectors – ‘Cry over You’ – that’s just begging for a over-the-top dramatic production. And Sloan gives it his all on the demo. It could have been a monster record, – either with his lead or someone else singing it, as was often the case with his early-to-mid 60s output.

Basically, Sloan could – and did – it all. He was a master at being versatile and inventive – a musical chameleon whose talent for spitting out hooks far outshone most other songwriters of the era. That’s my opinion of course but really, take a listen to any Sloan-Barri song and Sloan’s solo material and you’ll be amazed at what was achieved within a few, frantic years. Heck, the Fantastic Baggys album alone beats a few of the otherwise classic early 60s Beach Boys albums!

Yet, as fantastic as Sloan was he never achieved the amount of fame or recognition he should have and sadly withdrew during the 70s due to personal problems. To me, that’s one of the saddest tales in rock’n’roll. There was so much promise there, – so much talent that should have kept flowing and graced our ears. Why it didn’t happen probably amounts to a bunch of reasons, but it’s tragic all the same. 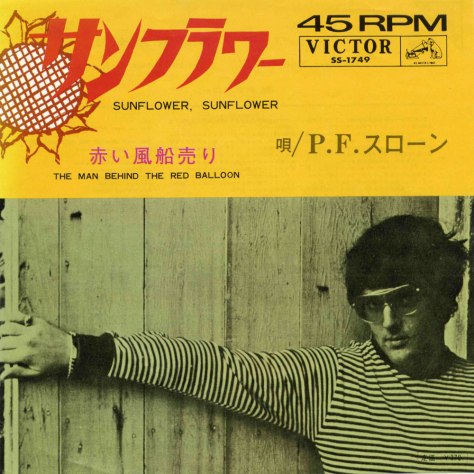 Anyone wanting to delve deeper into the Sloan legend should seek out Andrew Sandoval’s lovingly compiled ‘Trousdale Sessions’ demo collection that came out in 2001. It’s mindblowing! The sound quality is top-notch and listening to these rough demos you really get a sense of how good and versatile a pop singer Sloan was when he allowed himself to loosen up some of the Dylan voal mannerisms that dominate his two 60s solo albums. (‘Songs of our Times’, ‘Twelve More Times’)

There are actually more demos out there, passed on between collectors, but sadly with a sound quality that’s only so-and-so. Apparently, Sandoval had located enough demos to comprise a second demo collection but it never came out. What a shame! I hope that someday, somehow, other unreleased Sloan demos, known or unknown, will come out with the love and care that characterised the Trousdale Demos collection.

Sloan was one of a kind. A great talent, – one whose music has given me so much joy I can barely express it. Music that I know I’ll return to time and again for decades to come. So with this, allow me to bow my head and pay my respects to the one and only P. F. Sloan.

RIP & thank you for the music.

One thought on “Take Him for What He’s Worth”